The moment has arrived. The blog is going to take off.

Norman has been immortalised.

He is now bound for superstardom. He will, no doubt, shed me once he’s famous enough to do a solo Norman act. For now I’ll ride on his coattails.

I’m sort of kidding. Norman would never leave me, just as long as I promise to keep feeding him off-cuts of pastry and brushing him so his fur stays unmatted.

And he has been immortalised. Unfortunately it wasn’t because he was scouted on the street and noticed for his handsomeness. I requested he have his likeness made into a cupcake topper.

Because I am that crazy dachshund lady.

Today, whilst walking the Sculpture by the Sea route with friends, I spotted an adorable pair of sausage dogs. As well as being able to take in the amazing sights (which I Instagrammed, and captured, filter-free on my iPhone):

I caught up with the lady and her sausage dogs and had a chat. I’m okay with the fact that I’m a crazy dog lady, I think it kind of suits me.

So when the opportunity came for me to have Norman made into mini cupcake toppers (with the help of the ever-accommodating Bianca from Communicake It), I almost fell over my own feet with excitement.

Even better,you can order your very own Norman!! Is this not the most exciting thing you’ve ever heard??

I don’t know that Norman trusted them at first. Maybe he was worried that he’d be superseded by a younger, shinier version of himself? But he seemed to like them more once they were in the cupcakes!

Communicake It is officially my favourite – not only does Bianca put up with my craziness, she threw in his name in beautiful cursive writing for free. I also feel that I should disclose that I paid for the mini Normans, so this isn’t a sponsored post, I’m just SUPER EXCITED ABOUT THEM!!

Oh also, given that this is a baking blog, I used the chocolate cake recipe from here and halved the mixture (and cooked them for 15 minutes at 180C), and this vanilla icing with two tablespoons of warmed up jam thrown into the piping bag to give it a nice raspberry swirl.

I whipped up the quickest cupcakes I could think of just so I could showcase Norman in all his handsomeness.

Is that really lame?

What do you think? Would you have your dog immortalised in cupcake topper form?

8 thoughts on “Norman and superstardom” 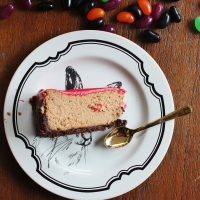