I’m not really that big a fan of Valentine’s day. I love the idea of celebrating your loved one, and I love ANY excuse to bake, but I get a little jaded by the comparisons and expectations that couples have put on them as the day dawns. I would much rather a hand-picked bunch of flowers than a shop bought one, I’d rather a batch of home-made cupcakes than a box of chocolates – I love jewellery and pretty things, but I much prefer presents that are better thought out.

So when I saw heart shaped pastries on Pinterest, I started to think about what else I could make into heart shapes. Y’know, because baked goods + festive shaping = ultimate gift.

Ask anybody, it’s a well-known fact.

Skip the soppy cards and boring presents this Valentine’s day, make your partner an edible gift instead! If you’re not  a fan of raspberries, try the original version of my ultimate weekend treat, cinnamon scrolls.

The Boy wasn’t available for the photoshoot, so Norman was my Valentine for the afternoon. He’s not really that big a fan of tea, or raspberries as I found out. He makes up for his pickiness and lack of conversational skills with his dashing good looks though.

Heat the milk in a small saucepan until it comes to a boil and starts to bubble up the sides, then remove from heat. Mix in your butter, stirring until it’s melted. Set aside to allow it to cool while you mix the other ingredients.

In a large mixing bowl, combine 2 cups of the flour with your yeast and sugar. Add in the water and egg, then the warm milk/butter mixture. Give it a good mix to ensure it is well combined. Add in your remaining flour in small increments, making sure that it is all picked up by the dough.

When you have a cohesive lump of dough that is easily pulled away from the sides of the bowl, it’s ready. Knead your bread with the dough hook of your stand mixer for 2 minutes.

Cover the dough with a damp cloth and let it rest rest for 10 minutes in a warm spot. Last time I did this I warmed it next to Norman by the heater, this time I went outside and let it rise in the afternoon sun.

Meanwhile, in a medium-sized bowl, mix together the sugar, raspberries and cornflour. Try to smoosh the shape out of the berries so that they colour the sugar and make a good spreading consistency.

Once you’ve made the raspberry paste, roll out your dough into a 30cmx24cm rectangle – this doesn’t have to be precise, but you’ll need to cut about 12 scrolls out of this, and you don’t want to be serving scrolls that are too skinny!

Spread your dough with the raspberry paste as evenly as you can. Try to spread it right to the edges of your dough so that the final scrolls will have seams of raspberry spread throughout.

To achieve the heart shape, take one of the two longer edges of the dough and roll it inwards. Repeat with the other side. Do this back and forth until you have two equally sized rolls meeting in the middle (for me it took two rolls of both sides.) If you want regular rolls, just roll the dough from one side so that it resembles a sausage.

Preheat your oven to 190° and grease a 12 cup muffin tin. Grab a thin, sharp knife and slice the roll into 12 pieces, then arrange them in your tray. These hearts are a little too big for regular cupcake tins, but if you don’t have a muffin tin (with slightly larger and deeper cups than a cupcake tin), try cutting 18 pieces out of the roll and cooking them in cupcake tins. 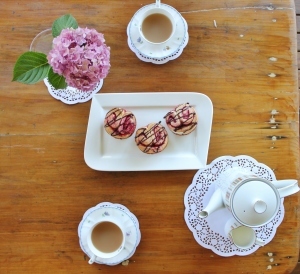 Pop them in the oven for 20-25 minutes and take them out of the tins while still warm. The raspberries and sugar will have formed a cheat’s jam, which spills over the edges and makes the sides sticky. It’s divine, don’t be put off by the stickiness!

10 thoughts on “Raspberry scrolls and hearts”