These little morsels are the easiest of easies. They’re also super delicious. Which is why I chose to make them while I’m still getting used to my oven. As you can see, they browned pretty darn quickly, but I tend to like my macaroons on the toastier side anyway. It gives them a wonderfully crunchy shell, which contrasts beautifully with the sweet, squidgy inside.

These four ingredient beauties are quick to whip up and super satisfying. You can top them with chocolate if you want, because chocolate makes everything better. They’re also delightful drizzled with a raspberry sauce.

Preheat your oven to 180°C and line a baking tray with baking paper.

Whip up your egg white vigorously until it forms stiff peaks. You may want to give your bowl and beaters a quick wipe down with half a lemon to get rid of residual fats to ensure that your egg white whips up nicely.

As your egg white is whipping, mix the coconut, sweetened condensed milk and vanilla together. Fold your whipped egg whites into the coconut mixture until just combined. Grab a soup spoon and scoop out one spoonful of mixture. Gently slide it onto your baking tray. Repeat until you’ve used up all of your mixture. Neaten up the edges of the macaroons with your fingers if any of the coconut pieces have tried to escape. 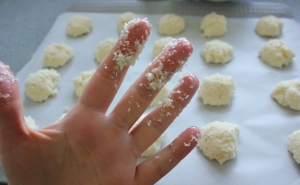 They’re a little bit messy. Your hands will be covered in coconut and deliciousness. Don’t pretend it’s not fun!

Pop them into the oven for 20-25 minutes, until they’re nice and brown on the outside. Yours probably won’t go as brown as mine because you will be used to your oven (whereas I am still getting used to mine.)

If you want to drizzle them in chocolate, simply melt the 70g of chocolate and scoop it into a snap lock bag. Snip a small part of the corner of the snap lock bag off and work quickly, zig-zagging the bag over the top of the macaroons.

If you’re a fan of coconut recipes, check out these other winners.

2 thoughts on “Coconut macaroons and ease”