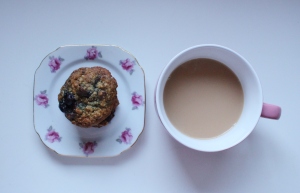 These biscuits are dangerously close to being healthy…sort of. Everybody always assumes that oats and coconuts make for a healthier alternative. I put in enough chocolate chips to solve that problem though! I solemnly believe that biscuits were made to be indulgent – if you’re trying to be “healthy,” you’d pick something without loads of sugar and butter in it.

Everything in moderation, right?

I’m not one to get preachy about health (I consume waaaaay too much sugar to ever be preachy about health), but I felt the need to put a little disclaimer here – these biccies do have plenty of good ingredients in them – blueberries are jam packed with antioxidants, dark chocolate increases blood flow and oats help lower your cholesterol levels.

Putting the healthy debate aside, I can promise you that these biscuits are delicious. Chocolate and coconut are great friends, when blueberry is added into the equation, it’s like a glorious little party in every mouthful. The inside stays nice and squidgy, while the outside hardens up so that there’s a lovely contrast between the two textures. 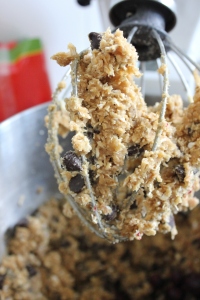 Preheat your oven to 180°C and line a baking tray with baking paper.

Cream together your butter and both types of sugar. Add in the sugar and vanilla and mix until well combined. You may need to scrape down the sides of the bowl a little to make sure that everything mixes in. Pop in the flour, cinnamon and bicarb and give it a good mix. Mix in the oats and choc chips until they’re well distributed. 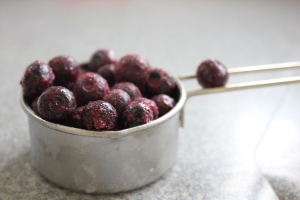 Grab your blueberries out of the freezer and gently mix them in. for this part of the recipe, it’s easiest if the blueberries are super frozen and not squished too much, they’re less likely to bleed their colour this way.

Shape them into little balls (using a generous tablespoon of mixture for each ball) and line them up on your tray. Allow them 2-3cm space, they will spread. Pop the in the oven for 15-18 minutes, remove them from the oven and then allow them to cool and harden up for 5 minutes. 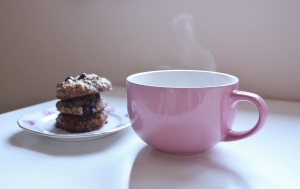 Then gobble up as many as you see fit! 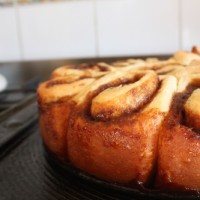 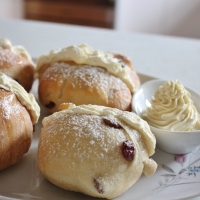