When I woke up this morning it was raining. Hard.

It’s been doing so on and off for a few days now. This kind of weather makes me want to shrug off anything that resembles responsibility and stay in bed, only leaving the covers to bake and make more tea.

Scrolls are perfect for this kind of weather. You can whip them up and let them rest while you return to bed. Then pop them in the oven and take them back to bed once they’re done!! The sweet smell of caramelising brown sugar will creep into every corner of the house and have it smelling inviting after just once batch. The smell will settle right around the house like a big, warm hug, fending off those rainy day blues.

These scrolls are perfect with a delicious cup of milky English breakfast and taste best when consumed in bed. For the cinnamonier version of these scrolls, check out my Simple Sunday Cinnamon Scrolls.

Heat the milk in a small saucepan until it comes to a boil and starts to bubble up the sides, then remove from heat. Mix in your butter, stirring until it’s melted. Set aside to allow it to cool.

In a large mixing bowl, combine 2 cups of the flour with your yeast and sugar. Add water and egg and mix. Add  the warm milk/butter mixture. Give it a good mix to ensure it is well combined. Add in your remaining cup of flour (do it 1/3 of a cup at a time.) You may not need all of the last cup of flour – when you have a cohesive lump of dough that is easily pulled away from the sides of the bowl, it’s ready. After the dough is cohesive, knead for 2 more minutes in your stand mixer. If you’re doing this by hand, make it 4-5 minutes.

Cover the dough bowl with a damp cloth and let rest for 10 minutes in a warm place. Meanwhile, in a medium-sized bowl, mix together the brown sugar, cinnamon and softened butter. The softer your butter is, the easier it will be for you to make the delicious caramel filling.

Once you’ve made the cinnamon paste, roll out your dough into a rectangle of at least 54 x 20 cm. This makes about 18 rolls that are about 3cm wide, so keep that in mind when you’re doing your rolling out.

Spread the caramel mixture across your dough as evenly as possible. Try to spread it right to the edges of your dough, you don’t want to cheat anyone out of their delicious filling! Peel your apple, remove the core and cute it into small cubes. Scatter the apple pieces across the dough, then roll the dough up by taking one of the longer edges and folding it in on itself, over and over. 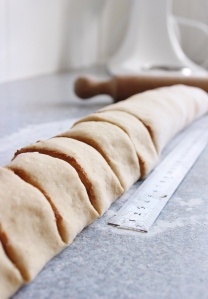 When you’ve got a nice big sausage, pinch the ends shut and cut into about 18 pieces of about 3cm each, using a thin, sharp knife.

Grease your cupcake tins and nestle one little slice of dough in each cavity. Cover the with the wet tea towel again and set them back in front of the heater for 15-20 minutes. The longer you leave them to rise, the puffier they will become.

While the scrolls rise preheat the oven to 190°C. Pop the scrolls in the oven for 15-17 minutes, or until browned. The sugar in your cinnamon paste will likely ooze out and give them a slight glazing. This is not just delicious, it also saves you the job of having to glaze them!  If you want to avoid this spillage, only make half the caramel filling. Set your buns aside to cool a little.

In the base of each of your cupcake cavities there will be a delicious caramel mixture. Some of it will have soaked into the bottom of your scrolls – spoon the remainder over the top to get the maximum caramel experience!

One thought on “Caramel apple scrolls and rainy mornings”