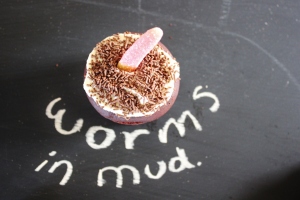 Last year for Halloween I made spooky cupcakes. There were ghosts, spider webs, grave yards, brains and mummies. I couldn’t find any photos of them, except for this one on Instagram. I’m an Instagram tragic, I know.

I really enjoyed making the tombs look like they were in dirt…mainly because I adore chocolate sprinkles. So I used them again! This time I created worms in mud cupcakes – they’re about as gross as I want to make my food look. They’re still pretty cutesy, but more importantly, they taste delicious!!

When you’ve got your cupcakes baked and cooled (I used these chocolate cupcakes so they look like mud), whip the butter, icing sugar and vanilla together until smooth and pale. You can add cocoa to the buttercream to make it look more like dirt, but I don’t like to make people think they’re eating actual dirt too much, so I leave the chocolate sprinkles to contrast against the white buttercream.

Grab your worms and cut them in half. Stick one worm piece (head or tail, it doesn’t matter) about 1cm half into each cupcake haphazardly so it looks like they’re poking out of or burrowing into the mud – and you’re done! Not only do you have delicious cupcakes, there’s a little lolly squirming about in there as well!

How do you feel about scary or gross Halloween cupcakes? Would you eat worms in mud cupcakes?

7 thoughts on “Worms in mud cupcakes and more Halloween ideas”