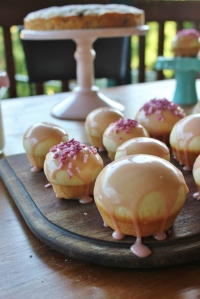 Lacking doughnut tins, I constantly avoid making doughnuts. Over the weekend, however, my will was not strong enough to resist my cravings for doughnuts, and I made them without the proper tin. And I made lots of them. Seriously, lots.

Was it an issue? Not at all. In fact, I’d say they were a resounding success. They were slightly heavier than a fried doughnut, but the taste was perfect. The Boy took one bite, and, eyes widened, exclaimed “they actually taste like doughnuts.”

As though my doughnut cravings would have settled for anything less!

The only tip in would offer for future doughnut bakers is to use thin jam. My jam had strawberry chunks in it (which is usually a good thing!), which made it difficult to squirt them into the centre of my doughnuts. 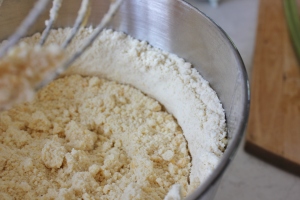 Fit your mixer with your bread hook attachment*. Combine your flour, sugar, yeast and salt. Add in your melted butter, slowly, allowing it to start to bring the mixture together. Mix for two more minutes, adding the eggs and vanilla as you go. Mix in the milk, half a cup at a time, until you have a cohesive dough, then continue kneading for 6 minutes.

*If you don’t have a stand mixer, a wooden spoon will work too, it will just take a little more muscle! When it comes to kneading, you can do this by hand as well, just adjust the kneading time by about half, so instead of stand mixing it for 6 minutes, you’ll hand knead it for 9.

Divide the mixture into two and put them in separate bowls. Cover your bowls with cling wrap, then leave it in a warm, dry place to sit for 1-1.5 hours. I left mine for 1.5, just to make sure I got maximum doughnuts out of mixture.

When your dough has 30 minutes of rising left, preheat your oven to 180°. Grease a large baking tray with the 20g of butter and put your rhubarb in the tray. Roast for 20 minutes, until softened. Take them out of the oven and allow them to cool slightly, then mash into a pulp.

Once the dough is risen, divide the dough in each bowl (use a sharp knife to easily slice through the dough) into 24. I find the best way to ensure even-sized doughnuts is to weigh the portions out on scales.

Once you have 48 bits of dough, roll them into balls by turning the dough in on itself and tucking the excess under.

Pop the balls into a greased 24 capacity mini cupcake tin, then let them sit for a further 15 minutes.

While they’re cooking, melt the chocolate, sieve the rhubarb pulp into the melted chocolate and mix in the cream. Sift the icing sugar into the mixture, then mix until smooth. If they icing isn’t looking pink enough, add a few drops of pink food colouring. 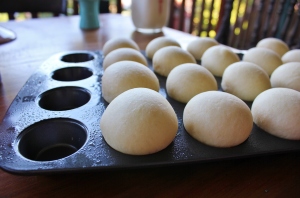 Bake for 10-12 minutes, or until they sound hollow when tapped. (If you choose to make 12 regular cupcake sized doughnuts, bake for 15-18 minutes.)

When the doughnuts are cooled, use a squeezy bottle to put a small amount of jam or runny custard at the centre, then spoon the glaze over the top. Top with sprinkles for an extra doughnut-y feel.

16 thoughts on “Rhubarb doughnuts and plenty”