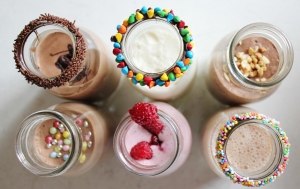 It turns out that yesterday was chocolate milkshake day.

How did I miss such a glorious day??

As soon as I found out that I’d missed it, I set about to make amends (mainly for my own benefit, but hopefully my readers will appreciate it as well!) I made six variations on the humble old chocolate milkshake – I hope one (or more) of them take your fancy. 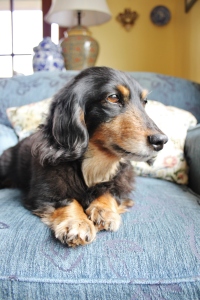 Norman wasn’t too impressed with my recipe choice today – he spent the day snuggled on the lounge because he decided it was too cold for milkshakes.

I love everything about milkshakes. I love how milk straight from the fridge is the coldest liquid substance you can drink, how lovely milkshakes are when they’re jam-packed with ice cubes, how some chunks of ice cream get stuck in your straw as you drink them. And how satisfying those last few chocolatey bubbles are when you get to the bottom.

I have really vivid memories of going to a café near my grandparents’ house in Nambucca during the school holidays. We’d go there after a morning at the beach; sandy, hair plastered to our faces by the salty water, slightly flushed from the mix of sun and the wildness of being at the beach. This café served these enormous milkshakes in tall milk-bar-style glasses. And for some mystifying reason the milkshakes had these little coloured plastic four-legged animals straddling the rim of the glass. We were mad about 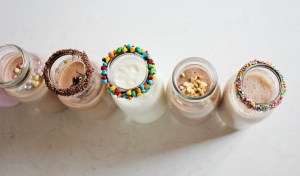 collecting these crazily coloured, translucent animals, we’d try to steal them off each other’s glasses while the owner wasn’t looking, but those plastic animals were valuable! Elephants and camels were pretty common, but if you got a lion or (gasp!) a coveted zebra, you were obviously going to have a spectacular day.

As an homage to that café (which sadly closed down years ago) and chocolate milkshake day, here are some milkshakes that will delight the big kid that we’ve all got lurking underneath a grown up façade.

This is probably the most indulgent milkshake in the post – it’s super sweet and so smooth that you’ll finish it in no time. Warning: do not attempt unless you’ve got a high tolerance for sweet things!

Melt the white chocolate in the microwave and stir the cream into it to make a thick chocolate sauce. Add in the vanilla and then pop the chocolate mixture, ice cream and milk into the blender. Blend until smooth and serve cold.

Chocoholics, this is what you’ve been dreaming of. With three types of chocolate (four if you include the sprinkles!), this milkshake is the stuff of legends.

This is my favourite of all the milkshakes in this post. It’s got a grown up feel to it (I use that term loosely!) because of the soft floral undertones that complement the chocolate. For tea addicts, this is a must try!

Pour your milk into a saucepan and bring to a boil, but be careful not to burn it. When it’s started to boil, remove it from the heat and pour it into a cup with the tea bags in it. Allow the tea to steep in the milk until it has cooled (or for at least five minutes – be patient!) Melt your chocolate and stir the cream into it. Discard the tea bags and blend the milk, chocolate mixture and ice cream together. Serve over ice for a refreshing drink on a hot day.

This is a pretty classic combination, but one that I can’t overlook – I’m a recent convert to peanut butter, so this combination is still wonderfully new to me. I’m a bit of an addict!

Melt your chocolate in the microwave and stir the cream into it. Pop the chocolate mixture, milk and ice cream into the blender. I feel as though this milkshake should be garnished with a little American flags and served with Reese’s Pieces!

This milkshake is similar to the white chocolate milkshake above, but the strawberries cut back on the sweetness. Raspberry and white chocolate are an amazing combination (I’ve said this before, here) and the raspberries give this milk an amazingly rich pink colour.

Melt the white chocolate in the microwave and stir the cream into it to make a thick chocolate sauce. Scrape the chocolate mixture into your blender along with the raspberries, milk and ice cream. Blend until smooth and sprinkle some raspberries over the milkshake before serving.

Chop up your banana and throw it into the blender along with the cream, chocolate syrup and ice cream. Garnish with some extra banana, or make it colourful with sprinkles! 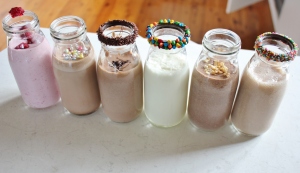 14 thoughts on “Chocolate milkshakes and childhood”