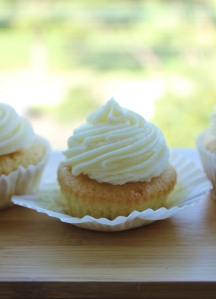 These cupcakes are officially my new favourite thing. I love experimenting with lots of different kinds of sweets, but there are a handful that I could cook at the last minute and know that they’d be a hit. There’s mum’s sticky date, cinnamon scrolls and Nutella fudge, just to name a few. These are recipes that I can always rely on to be brilliant. And I know them like the back of my hand, which helps!

These cupcakes are going to be added to that repertoire. They’re dainty and delightfully moist. They would make the perfect addition to a wedding cake table – as well as tasting awesome, the omission of the egg yolk makes them a delicate ivory colour. The Boy says they taste like something his nanna used to make, which is a big compliment!

If you’ve not got a go-to cupcake recipe, make these. They’re just what you want from a cupcake.

Preheat your oven to 180°C and line a 24 capacity cupcake tin with patty pans.

Cream together you sugar and butter until pale and fluffy. Add the flour, bicarb and milk and mix well. The mixture will be pretty dry at this point in time, but don’t worry.

In a separate bowl, whisk together your egg whites and almond extract until frothy. Let out some aggression on those egg whites!

When the egg whites are frothy, pour them into the rest of the batter and mix well.
Scoop enough mixture into your patty pans to fill them about ¾ of the way up, then pop them into your oven for 15-18 minutes. You’ll know they’re done when the spring back slightly when you press them. They should brown slightly on top as well.

Set them to one side to cool. 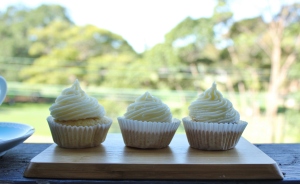 While the cupcakes are cooling, make a start on the buttercream. Whisk you butter, sugar and almond essence together, then add the cream. It’s best if the cream is at room temperature, otherwise you risk your buttercream going too hard.

You should end up with a glorious, thick buttercream which has a beautiful creamy texture. Resist the temptation to devour it, and set it to one side.

Grab a small piping bag and fill it with 1/3 of a cup of jam and pipe small amounts into the centre of your cupcakes. Don’t worry if your jam flows over the top of the cupcake, this just means you’ll have a little bit of jam poking through in the icing. It’s easier to use jam that doesn’t have seeds or large chunks in it. 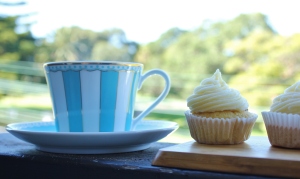 Once you’ve done the jam centres, load your buttercream into a piping bag and pipe away. If you’re not piping your icing on (ie you simple want to spread a thin layer on with a palette knife), I would suggest halving the buttercream amounts.

Enjoy with a strong cuppa! 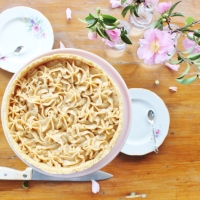 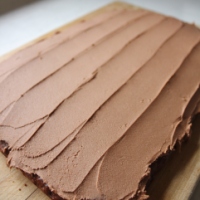