Chilly weather is making me fat. I’m staying indoors, seeking out sugar and becoming too attached to the heater. Luckily, chocolate Nutella Pots de crème are not as indulgent as you would imagine. Below a dark layer of chocolatey thickness is a paler, lighter substance…I feel less bad about eating them because they’re not too rich, they’re just right.

These little devils are less posh than they sound. The French vibe they give off is enough to wow dinner guests, but they’re super simple…not to mention delectable! They’re basically a chocolate custard pudding thing – do labels matter? If people ask, just say they’re made entirely of delicious ingredients, they don’t need a name.

You can throw them together in 15 minutes and leave them in the oven to do their work. Pop them in the fridge while you eat mains, and they’re ready to be devoured! They’re adaptable enough to be served alongside a three course dinner, but  will fit neatly along side a casual Sunday lunch menu. Serve them with berries to dress them up, or chuck a spoon straight into them to give them a laid back scruffy feel.

Do what you please, just make sure you lick the bowl.

Chocolate Nutella pots de Crème (aka deliciousness in a ramekin)

Preheat your oven to 170°C. Resist the urge to eat the Nutella. Find six ramekins or oven-safe tea cups (I’ve gone for a mix of both because two of my Nanna’s darling ramekins have broken over time.)

Mix together your egg yolks, sugar and vanilla in a bowl. Set them to one side.

In a saucepan over low heat, melt the chocolate down and add the Nutella. Once you add the Nutella in it should be thicker and glossier. Once again, resist the urge to eat the Nutella from the jar.  Mix the chocolate and Nutella until no lumps remain. Add your cream and milk in and turn up to medium so that it combines. Keep stirring. 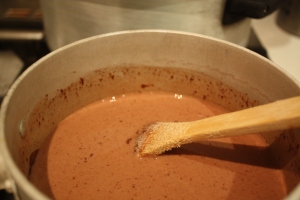 The mixture will be speckled, so you need to keep on stirring for about ten minutes. You don’t want speckled pots de crème! Once the mixture is an even colour (with no more speckles) slowly add the egg mixture in. Make sure the chocolate mixture isn’t too hot, you don’t want to cook the sugary egg!

Once all the egg mixture is incorporated, whisk the mixture over heat for five minutes, allowing it to bubble and thicken slightly.

Divide the mixture among the ramekins. If you’re a messy pourer like me, wipe the edges so there are no sloppy bits. Place the ramekins in a baking tray and carefully pour the hot (not boiling) water into the tray, about half way up the ramekins.

Pop them in the oven for 50 minutes to 1 hour. If you can gently press the top of the chocolate without it wobbling too much, they’re done. Put them back in the oven if you’re not 100% sure, the water means that it’s really hard to burn them. This style of cooking also ensures that your mixture is super silky and smooth. When they’re out of the oven, allow them to cool and place them in the fridge until they’re ready to serve.

Use a vegetable peeler to cover your pots de crème with shavings of chocolate – enjoy! 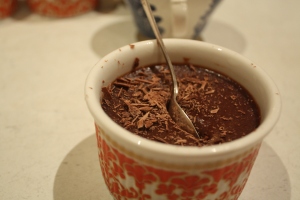