To top all of this off, the beautiful rustic table that I bought for our dining room didn’t fit through our door (insert crying face here), so we’re borrowing one from my brother’s generous girlfriend (who has been coming up lots recently!)

All of these things are different to what I am used to!!

What I do like about change though, is that it is a catalyst for experimentation. Lacking a cake tin, I opted to go back to my parent’s house and use their kitchen and camera. I was also equipped with their fabulous house warming present to the Boy and I, the Country Women’s Association Cook Book. Aren’t parents fantastic?

(Going home meant that I got the chance to visit my number one hound.) 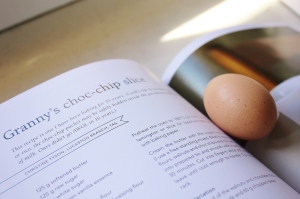 The thing about my parent’s house though, is now that I’m gone, they only have the basics. So I was forced to experiment. I ended up adapting a recipe from the Country Women’s Association Classics cook book. It’s gorgeous to look at and has adorable comments from association members. Definitely worth a read. So this is a little bit of a twist on a reliable set of ingredients.

I love that the resulting slice is kind of hard to define. I think it’s like a giant cookie, The Boy maintains it’s like a big, square cupcake. Whatever it is, it’s delicious and can lend itself to any type of situation – it would sit happily on a high tea platter, on paper plates at a child’s birthday party, or teetering on the edge of your afternoon tea saucer.

Beat together your butter and sugars. Add in the egg, then the vanilla and mix. Mix in both types of flour (you don’t have to use wholemeal flour if you don’t want, but it adds and extra layer of flavour and homeliness.) Mix in half a cup of choc chips, then add the milk, which should loosen the mixture slightly. Scrape it out of the bowl and into your prepared tin.

The mixture will be thick and sticky, so to press it down into the tin evenly, lightly dampen your hands and use your fingers to press the mixture into submission.Make sure you get it into the corners, because the mixture won’t spread much when it bakes.

Press the additional tablespoon of choc chips into the top (they’re mainly for aesthetics!) and then pop into the oven for 30-35 minutes. 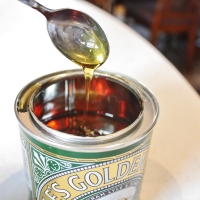